A journey to Brighton in May 2016 – A report, written by the group 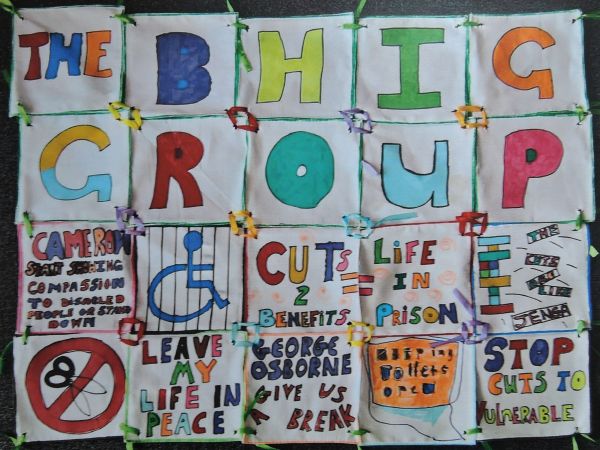 Being heard in Government

From May 21 to 26, we have travelled to Brighton-Hove. There, we have met the Self Advocacy Group "Speak Out". One of the sub-groups of "Speak Out" is called "Being heard in government" (BHIG); it means: to be listened to by councillors and by the administration.

Here, you can find a presentation by the BHIG-group.

And here, you can find photos from the journey.

Speak Out proudly presents his new film on Youtube.

Our Meeting with the members of "SPEAK OUT" in Hove/Brighton

We find it great to have met the people from the BHIG-Group face to face. The visit in the house and office of SPEAK OUT has impressed us a lot. Especially the fact that women and men with learning disabilities were fighting themselves for reaching their aims and their rights. They don't leave it up to their representatives. We can learn from them.

The people from SPEAK OUT are affected by a rise of prices in the everyday life. And they are confronted with reduced social benefits. We are wondering how people in Great Britain with learning disabilities can defray the cost for the rent for flats or houses. And how they may pay their living. Do they get allocations for the rents? Are they entitled to have a personal assistant? Do they get individual assistance when they seek for a job?

It would be helpful if you could give us an example, so that we understand better the various cutbacks.

We regret the "Brexit". We discuss often about it. We wonder about the concrete consequences for people with learning disabilities in Great Britain. Common projects with partner-groups from other European countries might not get subventions any more.

The members of the BHIG-Group observe a growing racism. We wonder if people with learning disabilities are especially concerned. They are also worried about less respect for the human rights. We find this alarming and ask: In which way does the change become apparent?

Our visits to Brighton and London

Many of our group were impressed by the huge buildings and places of interest. In London, we were struck by the wealth. Everything is very expensive. The entries to the places of interest are costly. People with learning disabilities don't go for free or get a reduced entry. Nevertheless, we could visit Paul's Cathedral thanks to a very kind guide who didn't want us to miss the visit of this interesting church with its long history, its precious architecture and decoration. The same is true for our visit to St. Bride's Church.

We suggest to our partners from SPEAK OUT to elaborate an alternative guided tour through London – in order to discover the town with the eyes of a person with learning disabilities.

What we have learned

We have studied maps and guidebooks of the British south coast.
We have discussed how to find out a partner group with learning disabilities.
We have searched by internet and made our first experiences with this medium.
We have discussed together about the means of transport and decided to take the plane.
We have prepared ourselves together for the flight. Tobias had brought along a board case to show us the permitted size and gave us tips for the packing.
The check in at the airport of Stuttgart-Echterdingen was rather exciting: our handbags were checked, some of us had to take off their shoes which were inspected closely. Some of us got a bit nervous while looking for their documents and medicines. In order to avoid such excitements in a future travel, we plan to discuss which kind of bags would be suitable for finding everything easily. Finally we have managed to check in and to fly rather well.
In London-Gatwick we had to queue up in long lines and have learned from the British and other travellers how pleasant is discipline. Nobody was trying to get in front of you.
At the journey we learned to assist us mutually: Alex had carried the luggage of Nelly. Tobias and Ute had organized the cheep transport for the group to London. Tobias had proposed that we should take breakfast that day at the station in Brighton, to ensure that we wouldn't be late nor in a hurry – and we did so. Marlene reminded us of the time-table, she served as interpreter and assisted others on footpaths. Also Martin worked as interpreter for some of the group. Tobias and Alex pushed Nelly's wheelchair through London. Ingeborg made the small group enthousiastic about her little conference on Hydepark. Volker gave the group informations about historical monuments. And Nelly, unintentionally, helped the second small group to be shown round in St. Paul's Cathedral by two guides – for free – because of her wheelchair. We learned that Queen Elizabeth and her husband would celebrate their 90th and 95th birthday in this church, a month later. Alex has seen the celebration on television.

What is "different" and how we coped with

We have learned that some things in the English every day life were different from ours, for example:

The time – When we got out of the plane, the clock showed an hour earlier. Referring to our Central European time, Great Britain is one hour "behind". But we adapted quickly to it.
The language – To understand English and to speak it, is not easy. But we have some language-talents in our group who liked to serve us as interpreter.
The money – To pay in Pound Sterling and not in Euro, was a bit complicated for us. Even that we had prepared ourselves to this change.
The Traffic – In Great Britain cars run on the left side. This means: Busses, cars, motorcycles and bicycles run the other way round than we are used to. Sometimes we got confused. When we crossed the street, we needed to look first to the opposite side than usual. We had to change our habit.
Electrical appliances – The English 3-point-plugs have a different shape and in a hotel the current is not sufficient for our foehns. We needed adapters which we had brought along from home.
The meals – Our group was impressed by the rich English breakfast. We have documented this in many photos.